The two new additions to ThorCheck bring its powerful comparison engine to bear on questions of mark similarity.  If you represent a junior party, you can use these tools to identify evidence of mark co-existence that can help convince Examiners, counter-parties, or a court that your client’s mark should be able to co-exist with a prior mark. If you represent a senior party, you can find evidence over overlap – that the same company owns multiple marks that contain a single term (Term Coexistence) or that the same company owns marks that differ only (or mainly) by the term you search for (Term Difference). This powerful evidence takes hours to track down manually, but ThorCheck makes the research instantaneous – you can do your best work, and work much more efficiently. 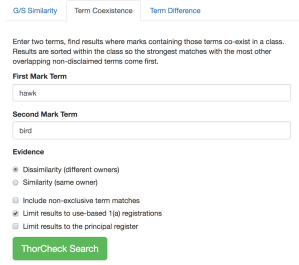 Results pairs are organized by class. Within a class, these with marks that share another common term prioritized, like the BLACKHAWK vs BLACKBIRD registrations shown below. This search identifies dozens of high-quality matches similar to BLACKHAWK vs BLACKBIRD, plus many, many more “looser” matches.

As with all ThorCheck reports, you can export tagged records via Word to incorporate the summary chart into a draft Office Action Response or other document, or export TSDR status and title copies to make this quality evidence official “of record” in your prosecution history file or TTAB proceeding.

Use the “Term Difference” tool to identify instances where two owners have marks in a single class that differ by a term. The second new tool requires only one input: the term by which they differ. So, if your mark differs from a prior mark largely due to the term PURPLE, you can enter that term and find other instances of co-existing registrations that differ only by this term. Since this tool is prioritizing results that share a common term (whatever that term is), it’s almost impossible to duplicate manually without hours and hours of effort.

The excerpt below shows sample results for the PURPLE search. Results that differ ONLY by the word “purple,” like PURPLE HEAT vs HEAT and PURPLESTAR vs STAR & Design in the example below, are prioritized. The full report identifes dozens of matches. 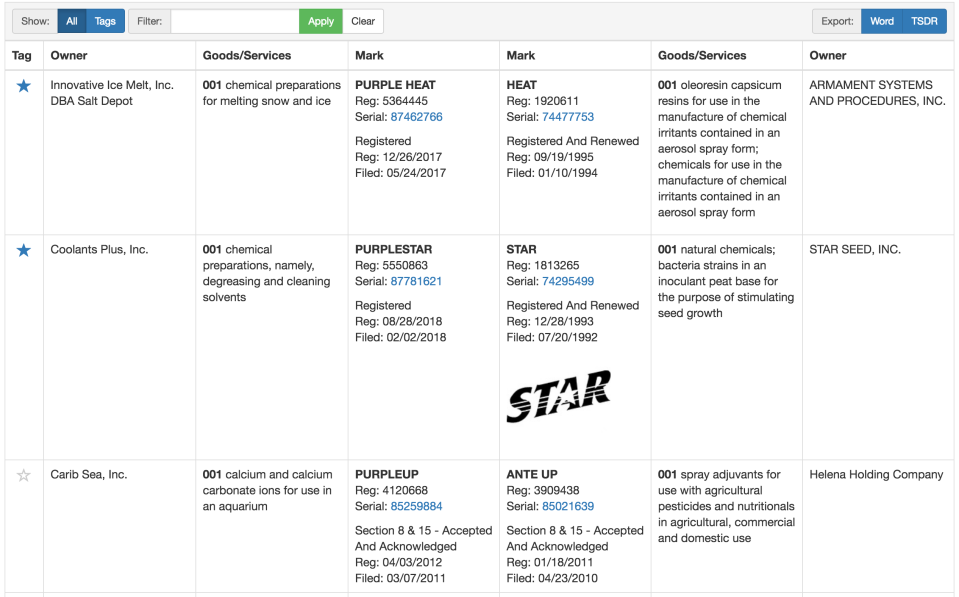 We can’t wait to see how you use these new ThorCheck options!