What is this series?

We break down a recently-filed, successful Office Action Response, looking at the case law, evidence, and strategic decisions that made it a success.

Today, we are looking successful Office Action Responses filed in the course of prosecuting applications to register the marks SCOUT BEER and for HEARTCRAFTED, both for beer in Class 32, Ser. Nos. 86664817 and 86752008. AJS Beverages, Inc. (SCOUT BEER) is represented by Andy Harris of Northwest Corporate Law LLC and Fior di Sole, LLC (Heartcrafted) is represented by Katy Bailse of Reed Smith.

Both applicants claimed use under Section 1(a) of the Lanham Act prior to this Office Action, and both provided photos of use of the marks in retail environments – a SCOUT BEER beer garden and a HEARTCRAFTED sign in an interior bar. Both are shown below.

The Office Action for SCOUT BEER took the position that the mark shown was SCOUT BEER GARDEN, not SCOUT BEER. The applicant could certainly argue “an applicant has some latitude in selecting the mark it wants to register,” TMEP §807.12(d), that “garden” will be perceived as non-distinctive and just a place where SCOUT BEER is served.

The Office Action for HEARTCRAFTED also raised a specimen issue, but a different concern: that the mark was not used in sufficient proximity to beer, which is not shown on the bar photograph, and suggests that it would be perceived as for bar services in any event. The applicant could have argued, with justification, that the signage was a “display associated with the actual goods at their point of sale.” See TMEP §904.03. If the mark was shown in the applicant’s own brewpub bar, it makes sense that the mark would not just refer to a restaurant/bar service but the applicant’s house beers as well.

While both applicants could reasonably pushed back, neither chose to file arguments. Why? Most likely because of cost. Submitting alternative photos provided by the client takes just a few minutes, while arguing the points of law requires much more time to research and draft.

The Office Action Response for SCOUT BEER provided several photos of the SCOUT BEER mark in use on beer kegs.

The Office Action Response for HEARTCRAFTED did the same, and also provided beer labels.

Silence can be golden. The quickest and cheapest way to a good result isn’t always via argument.

What is “Anatomy of an Office Action Response”?

Today, we are looking at a successful response to an Office Action for the mark PRIVACYCORE in the stylized format shown below, Ser. No. 86/922,696. The Examining Attorney viewed and initially searched the mark as EPRIVACYCORE; more on that later on.

In the initial Office Action, the US Patent & Trademark Office Examining Attorney preliminarily refused registration under Section 2(d) of the Lanham Act, 15 U.S.C. §1052(d), on the basis of a likelihood of confusion with Reg. No. 4,919,881.

The Office Action focused on the relationship between the fields of use (training vs. consulting services in the same privacy and security fields) and the similar starts of the mark, EPRIVACY—.

The Office Action also noted a potential likelihood of confusion with two prior pending applications, Serial Nos. 79/177,839 (TRADECORE) and 86/683,357 (EPRIVACY HEALTH SOLUTIONS). Details for each follow:

The Office also suggested some minor amendments to the descriptions of services. None of the changes were substantive nor affected the substantive portions of the response, and we will not focus on them for the rest of this post.

We will do a quick analysis of the Office Action through the prism of TM TKO’s tools. You can see an interactive version of a search report for EPRIVACYCORE (searched with an initial “e,” as the Examining Attorney did) here.

This bar graph shows how TM TKO divides up the mark (E – PRIVACY – CORE) and the relative distinctiveness of each of the terms in the mark (none very distinctive on their own). For example, “privacy” in Class 41 is commonly disclaimed and moderately diluted on the registry, and shows up frequently in relevant descriptions of services. The “e” prefix and “core” each also appear relatively weak. 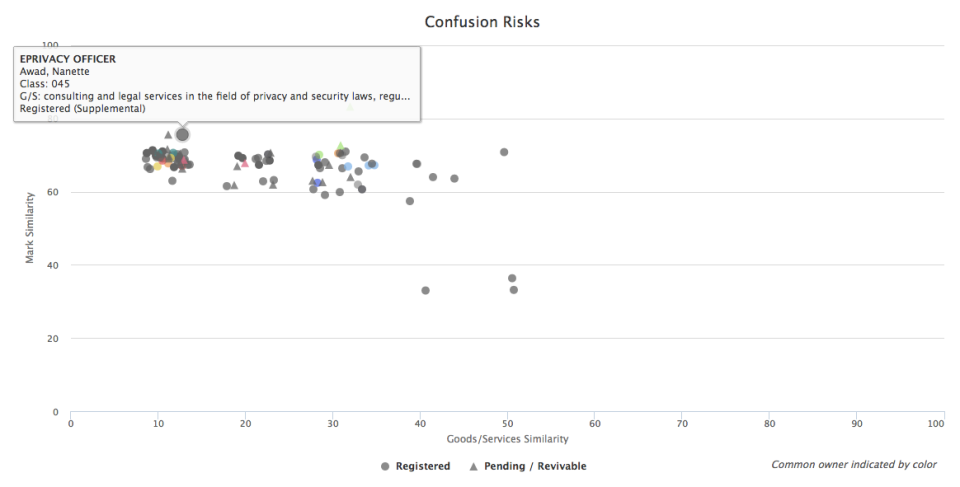 The strategy for addressing both of the prior cited marks that had not gone abandoned at the time of the response seems pretty clear: argue that the differences between the marks outweigh the similarities, and that shared portions of the mark aren’t strongly source indicating by themselves, as in Citigroup Inc. v. Capital City Bank Group, Inc., 98 USPQ2d 1253, 1261 (Fed. Cir. 2011) (no confusion likely between CAPITAL CITY BANK and CITIBANK due to commonality of “City Bank” in the industry).

Counsel for the applicant, Wade Savoy of Patent GC, argued that confusion was unlikely to occur with either of the two still-active cited registrations.

For the EPRIVACY OFFICER citation, the applicant argued that the applied-for mark was in fact just PRIVACYCORE not EPRIVACYCORE, and that the initial design is abstract rather than a design of an “e.” The applicant pointed to its textual uses of PRIVACY CORE, where the mark did not include an “e,” as evidence. This is a reasonable argument, and perhaps the only one the applicant can make: the actual use of the mark does significantly impact how customers and the public are likely to perceive the mark. It does not seem like current use is entirely determinative, though. First, the applicant could be using two very similar marks, and consumers could see them as distinct. Second, and maybe more importantly, the applicant’s use of a related mark could change, and the applicant could change to EPRIVACYCORE without impacting the existing registry. In any event, the argument was apparently accepted; the mark remains identified on the registry at publication as PRIVACYCORE with no initial “e.” The remainder of the applicant’s argument – that the shared term PRIVACY was far outweighed by the differences between CORE and OFFICER – was, naturally, quickly accepted. It is far from clear that the refusal would have “stuck” even if the mark was viewed as EPRIVACYCORE, but the applicant would certainly have had a more difficult road.

Stylistically, the applicant kept the reply fairly informal, referring to all the relevant precepts of trademark law but without citations or highly technical arguments. This is frequently an effective style, and was a great fit here for two reasons. First, the arguments that the mark is likely to be perceived as PRIVACYCORE instead of EPRIVACYCORE is not fundamentally rooted in case law, and finding directly on-point cases would have likely been a time-consuming and expensive process for minimal benefit. Second, neither of the marks that generated the 2(d) citations were that similar. Exhaustively citing cases for basic propositions of law, like the main DuPont factors argued in the response, would have been overkill, and there were no highly technical arguments required that would have benefitted from detailed case law citations. There may also be some benefit from not making a weaker refusal “feel” stronger by making extensively arguments – or at least from not making the Examining Attorney plod through a twenty page document when a couple of pages will make the same point just as well.

It is sometimes easier to correct the assumptions underlying a refusal than to fight it out on each point of law.

We hope you like this series and find something informative in each “Anatomy of an Office Action Response” post.